The bias is extremely bullish while the price remains above 0.5840 area. Any correctional move down could be considered as a better buying opportunity, rather than a potential trend reversal.

Price Action: We will start by observing the high timeframe, specifically a Weekly chart. You can see the Fibonacci retracement indicator, applied to the last corrective move up, prior to the huge price drop. It shows that AUD/CHF has reached a 427.2% retracement level at 0.5342, which has been rejected cleanly. This suggests that either temporary or even permanent bottom could have been reached. If this is the case, the correction to the upside will be extended and we might even be witnessing a long term trend reversal.

On the chart, there are other Fibonacci retracement levels, which should act as the resistance in the coming weeks. First is 227.2% Fibs at 0.6048, and second is 161.8% Fibs at 0.6278. Each of these levels can play a very important role in further price development. 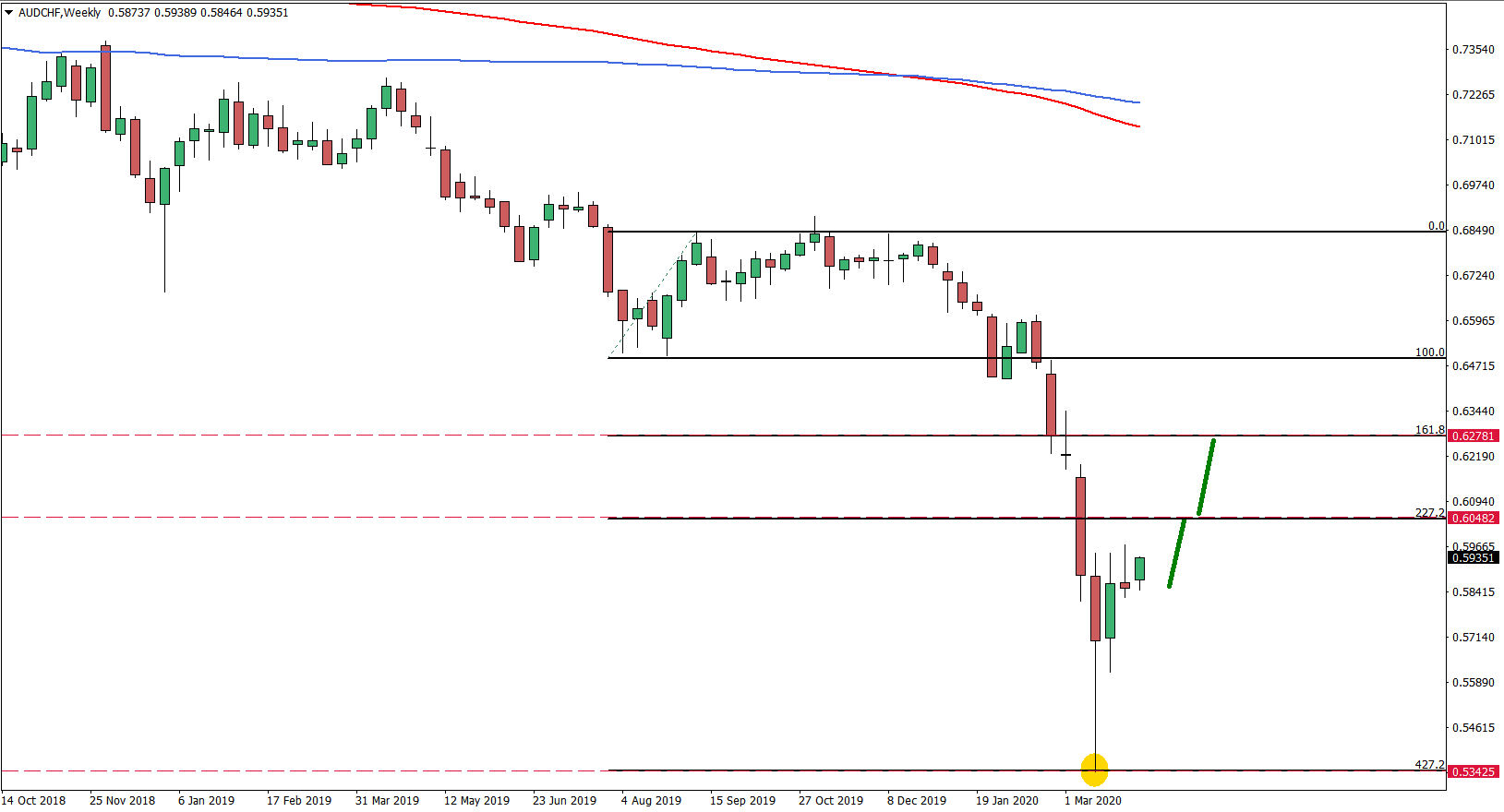 Below is the 4-hour chart, where we can see strong support at 0.5840 area. This is actually a 50% Fibonacci retracement level which previously was a resistance. Now it became the support and has been rejected multiple times, suggesting the domination of the uptrend. On this chart there are also 2 important retracement levels of the Fibonacci applied to the last strong trend down. The first is 161.8% and the second is 361.8%. Both of them correspond to the resistance levels on the Weekly chart and should be used as the profit-taking levels. The nearest resistance at 0.6045 also corresponds with 200 Simple as well as Exponential Moving Averages, which could be the first profit-taking zone. Although if broken, AUD/CHF is likely to move towards the second target at 0.6280 area. 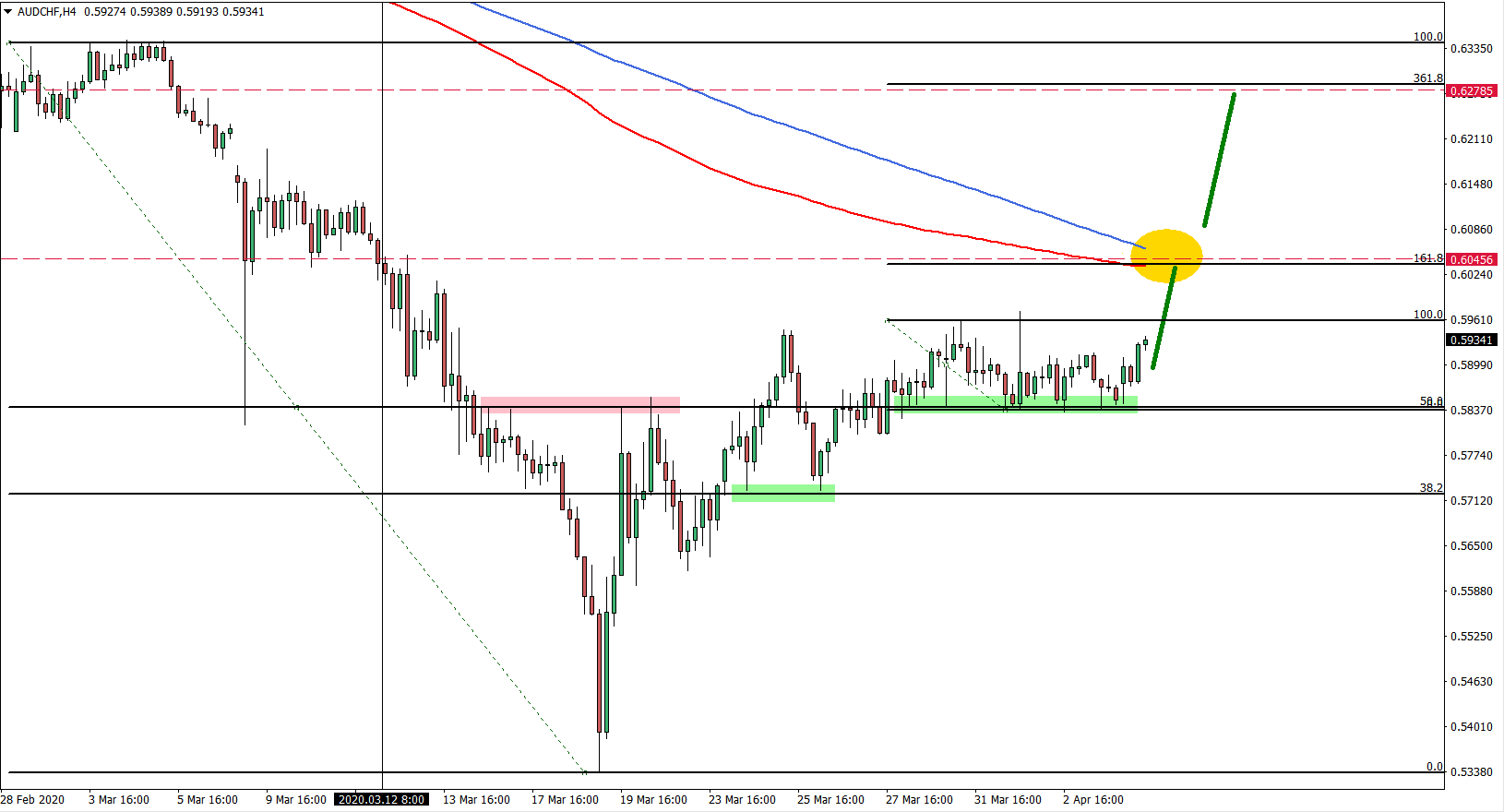 Finally, let’s have a look at the 1-hour chart, where things are also very interesting. The uptrend trendline has been rejected along with the 200 EMA. The rejection point has formed strong support for AUD/CHF, which has been respected by the market. Today price broke above both 200 MAs, after which found the support at these indicators. And just recently, several hours ago, price broke above the ascending channel, which can result in much stronger growth in the next 48 hours. 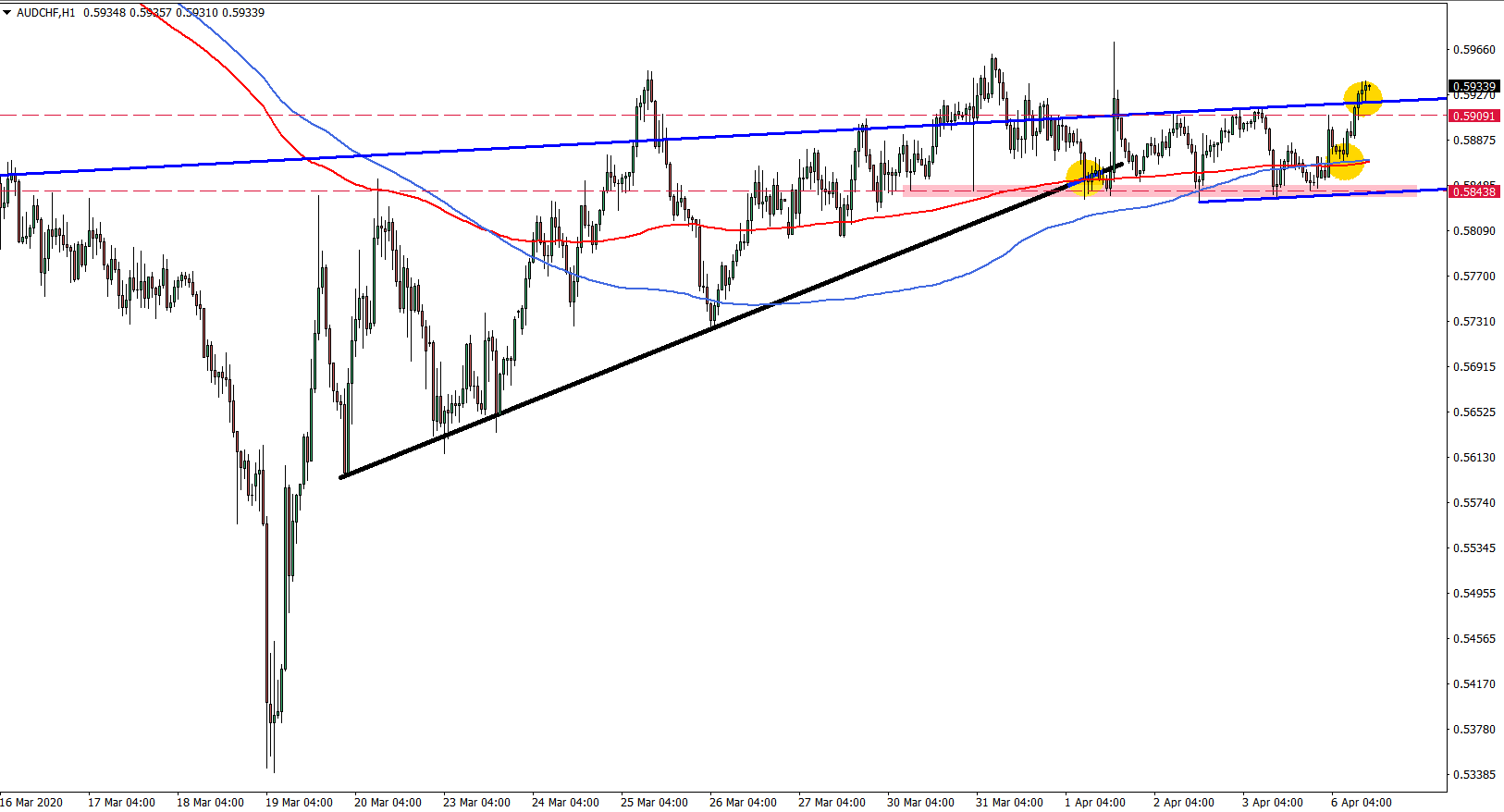 Potential Trade Idea:Buying on any dips is preferable, specifically if the price reached 0.5900 psychological support. But at the same time buying zone remains between 0.5900 and 0.5940. The exit signal would be the daily close below 0.5832 level, although even 4h close below this level could result in the bullish scenario being invalidated. In regards to the upside targets, there are two of them. The first is at 0.6048 and the second is 0.6278 level. These levels correspond to the 227.2% and 161.8% Fibonacci retracement levels on the Weekly chart.