Any move to the downside should be considered as a better buying opportunity in the short term. This is because there were no indications of a potential trend reversal, while the upturn should be expected to continue.

Looking at the 4-hour chart, it is clear that there is a very strong uptrend formed on AUD/CHF currency pair. The most recent price action shows, that there has been a very strong correction down, which has resulted in over 300 pips drop in the exchange rate. The correction was stopped at the previous are of resistance, where price nearly tested the 200 Exponential Moving Averages.

At this stage, there are no indications of the trend reversal, which suggests the continuation of the uptrend. But at the same time, there is one key resistance level which must be broken, to confirm the uptrend. Therefore, right now, we can only expect a strong wave up, which should push the price up to the 0.6700 psychological resistance area. To be more precise, there is a strong resistance at 0.6695, which is confirmed by two Fibonacci retracement levels.

First being the 38.2% Fibs, applied to the last wave up, where AUD/CHF has produced a higher high while hitting 0.6742. The second Fibs was applied to the current correction down, where 327.2% Fibs also corresponds to the 0.6742 resistance area. This makes it a very attractive upside target for buyers in the short term and might act as a profit-taking level. 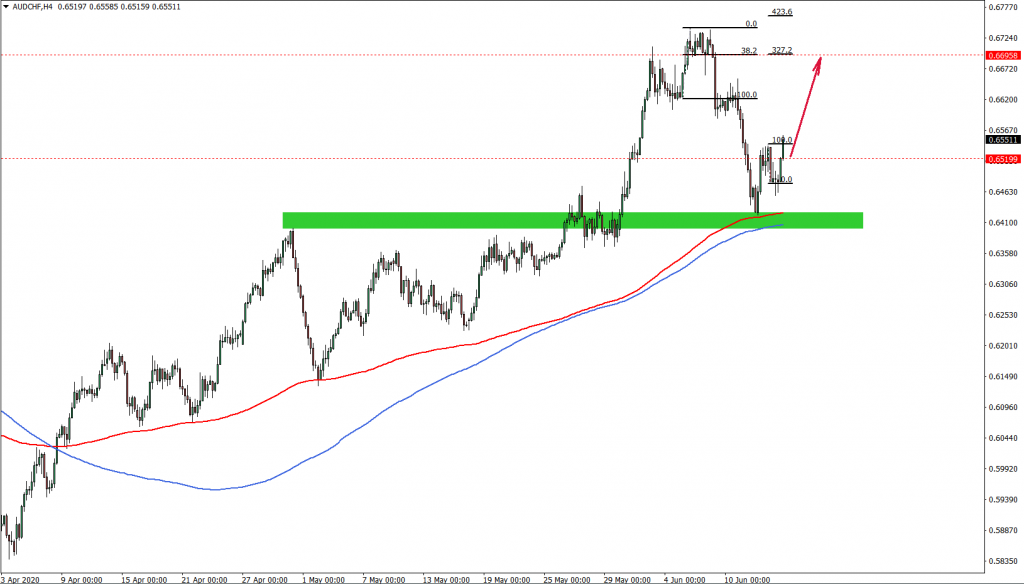 The ideal entry would be between 0.6518 and 0.6780 levels. Because this provides a good risk/reward ration for the expected wave to the upside. The stop loss can be placed just below the June 12 low, which is 0.6422. The take profit could be placed near 0.6695, which is confirmed by two Fibonacci retracement levels.