As traders, we explore markets looking for profitable opportunities. Moreover, we look for reliable, easy to spot, and low-risk trades. The bullish engulfing pattern belongs to the category of powerful formations due to its strong trend reversal properties.

In essence, the bullish engulfing pattern is a trading figure that consists of two candles, one bearish and one bullish, which engulfs the bearish candle. This formation illustrated in the graph below creates a powerful reversal pattern.

Structure of a Bullish Engulfing Pattern

The bearish or “first” candle has a relatively small body and short wicks. Moreover, the bullish engulfing or “second” candle, should completely cover or “engulf” the whole body of the previous candle. 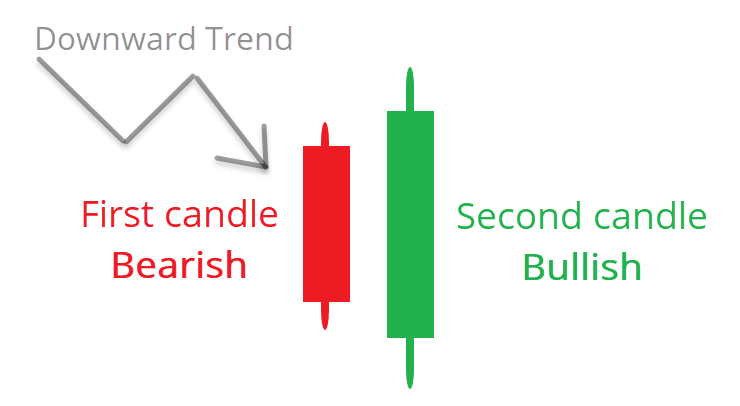 In short, these two candles create the entire pattern. However, there are still a few boxes to tick before you can move on to trade this pattern.

First, these two candles must appear in a downtrend, ideally at the potential bottom of the downtrend. At that particular moment, it is hard to predict whether the price will bounce or continue its way down.

However, we can easily spot a downtrend on a chart by observing a series of lower highs and lower lows; this might suggest the downtrend is losing traction.

As you can see below, it is crucial to monitor the opening price of the second candle. For a bullish engulfing pattern to take shape, the pair should open lower than the previous lowes price. You should be able to spot the following gap: 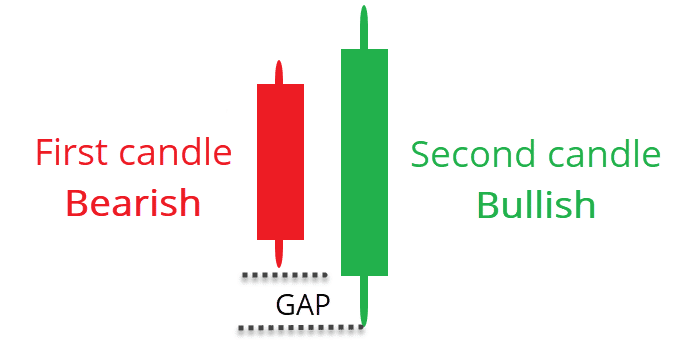 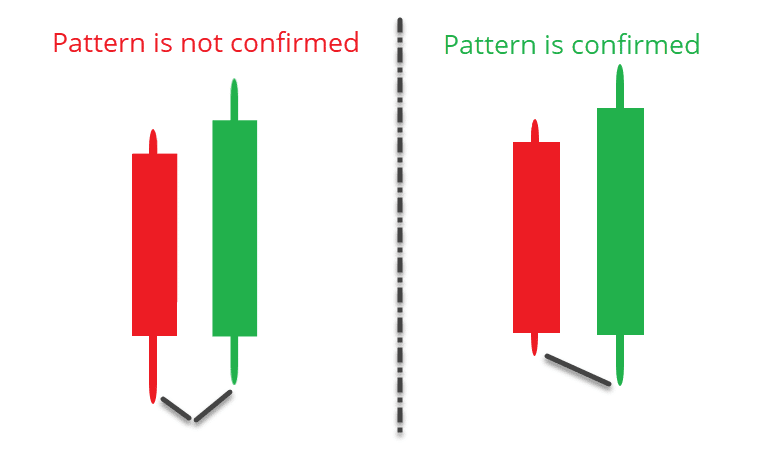 In the second phase, the price action goes higher than the highest price from the “first” candle.

Now with the bullish engulfing pattern in shape, let’s take a look at how this formation sends us a strong message, which represents a valuable input to consolidate a trading idea.

Why is it important?

Reversal patterns can be identified at the top or bottom of the previously prevailing trend. In this case, a bullish engulfing pattern occurs at the bottom of a downtrend. Therefore, that is why it is known as a bullish formation.

This pattern sends us a message that the previous trend is now ending or getting weak. In consequence, we may want to capitalize on the start of the new potential bullish trend.

Given that the “second” candle prints a short-term low, before the bulls can push the price action higher, it also suggests that the pair has reached its minimum value for the time being.

While the bears controlled the previous candle, the bulls now seize control of the price action as it raced higher to finish above the “first” candle’s highest price.

Examples of a Bullish Engulfing Pattern

As we outlined earlier, the “second” candle should entirely engulf the “first” candle’s body. The lower low price signals a high selling pressure present before the bulls took over the control of the price action and pushed it higher.

The change in the sentiment signals that there is a trend reversal. The new upward trend is the one that can become profitable if we go long.

Let us now look at how we can profit from this trend reversal. In the graph below, we have a EUR/USD daily chart. Please note how the price action moves in a clear downtrend since there is a clean series of lower highs and lower lows.

One of the swing lows (marked with the black horizontal line) had printed a fresh new low around the $1.1150 mark before the price bounced off to a nearby resistance.

Due to intense selling pressure, the bears force another test of the horizontal support to trigger stops below the previous short-term low.

The price action moves just a few pips below the horizontal support; however, the reversal starts to take place and the bulls force a strong bounce, which brings the price above $1.1180.

As a result, the bullish engulfing pattern is created. Before we describe the trading opportunity in detail, let’s check the current formation against the conditions we set earlier:

How to Trade the Bullish Engulfing Pattern

Once we’ve identified the formation and confirmed the bullish engulfing pattern, we now enter the trading phase. The goal of this section is to determine and break down the upcoming trade.

As we outlined earlier, our entry should be around the closing price of the bullish engulfing candle. Some traders prefer to wait for a potential pullback to get a better entry price; however, this is a risky approach since the price action can always burst higher and we could miss the trade.

In this particular example, our entry price for EUR/USD is $1.1180. It is important to mention that the stop-loss order should be placed below the previous low. In this case, we have two lows at a similar level, which helps us to determine the “invalidation zone”.

Any move below the previous low, with a little cushion allowed to protect against the whips, invalidates the pattern.

In this particular example, we don’t get a classic reversal. Instead, we see the price coming back down, nearly to the previous low, where we outlined the support area. However, the bulls defend this zone again and the price increases rapidly.

Since now our trade is in green now, we look at potential profit-taking areas. For instance, the first area is the immediate horizontal resistance at $1.1270, which offers the same amount of pips that we risk (90). Therefore, this doesn’t represent a great risk/reward ratio, but some traders would prefer to play it safe and close the trade here.

In contrast, traders with more patience and who are willing to risk more might wait for the price to potentially reach the second horizontal resistance. If the price hits this zone, there could be a profit of around 145 pips, which translates into a 1.6 ratio. In other words, we would risk 90 pips to earn 145 pips.

Whichever approach you choose should prove to be profitable since the bullish engulfing pattern is reliable and it is likely to hit more profit-taking areas than stop losses in the long run, if played by the book.

It is also important to mention that some analysts prefer to wait for the next or “third” candle to be bullish before they open the long trade. This validation candle, if green and strong, could indicate that the trend is going to reverse stronger. If not, they believe the bullish engulfing candle to have a strong potential to fail in its reversal attempt.

Please note that this approach might not be shared by many traders, although it is preferred for those who are looking for less risk in their trading approach.

In short, it depends on which type of trader you are. If you are looking for an approach that is associated with more risks and a more significant risk/reward ratio, then you could aim to open the trade as soon as the two-candle pattern consolidates.

On the other hand, the third candle should bring more certainty to the trade as you may receive another confirmation signal that the reversal is taking place. This approach brings less profit, but also less risk that the price action may rotate back lower to penetrate the support.

To sum up, let’s break down the bullish engulfing pattern and provide you with key takeaway notes:

One of the most sincere pieces of advice that you may get in the trading community is not to overthink trades. For this reason, you may want to learn to trade in easy and simple patterns, which are not so difficult to spot and implement, if all boxes are ticked. In this category, the bullish engulfing pattern is one of the best options.