How to Trade the Harami Candlestick

The Harami candlestick pattern is a trading strategy used to identify potential trend reversals or continuation in the price action. Harami has both a bullish and bearish version, with both consisting of two candles. While it can signal both a continuation and reversal, it usually takes the form of the latter.

What is Harami in Forex and How to Use it

The Harami candle refers to a Japanese candlestick pattern that consists of two consecutive candles. Its name, “Harami”, comes from the Japanese word for ‘pregnant’. In the illustration below, you can see both bullish and bearish Harami versions. 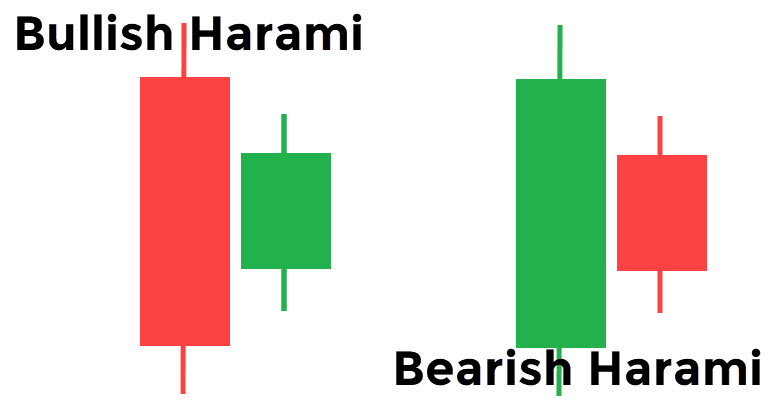 A bullish Harami candle is a chart indicator that signals that a downtrend is about to end and a bullish reversal can be expected to start. Traders consider the bullish Harami a reliable signal that advises us to open a long position.

As seen in the illustration above, the price action creates a long bearish candle in the direction of the overall trend. The next daily candle starts with a gap higher, while the high and close are at lower levels than the prior candle’s high. This way, the second candle is contained within the open and close of the leading bearish candle.

Conversely, a bearish Harami is made of two bars and indicates that an uptrend is likely to reverse. The methodology is absolutely the same as with the bullish Harami pattern. The first candle is long and bullish, while the second candle remains within the first candlestick body. An uptrend precedes the formation of a Bearish harami pattern.

While both the bullish and the bearish Harami are used by traders to forecast possible price reversals in the trend, candlestick chart analysis accommodates a wide array of patterns used to forecast future trends.

When trying to read the Harami candlesticks, paying attention to the context is essential. That’s why traders should try to analyze previous trends and price action in order to gain a more detailed insight for interpreting a Harami pattern and make predictions. If you take out the context, this candlestick pattern becomes trivial.

Once the pattern emerges, you could use the RSI to identify an overbought signal and open a short position. Alternatively, you can use Fibonacci extension lines to identify where the resistance line is. The occurrence of this indicator with a bearish harami will increase the chances of a bearish reversal.

How to Spot a Harami Candle

As noted above, a bullish Harami usually takes shape in an established downtrend and can be recognized by a large leading red candle which is followed by smaller bullish green candles. The price gaps up after a bearish candle and remains contained within the bearish red candle.

Hence, in both cases you are looking for large and long candles. The second candle should gap higher or lower, depending on the version, while the body remains contained within the prior candle. As we said, gaps in Forex are not common, hence harami candles are difficult to find.

In the example below, we have GBP/JPY price action trading on a weekly chart. What we have here is a double bearish harami candle. In the first case, there’s no bearish reversal as the price action continues to trade higher, in line with the overall uptrend. On the second occasion, the price movements correct lower to finish the mini uptrend. 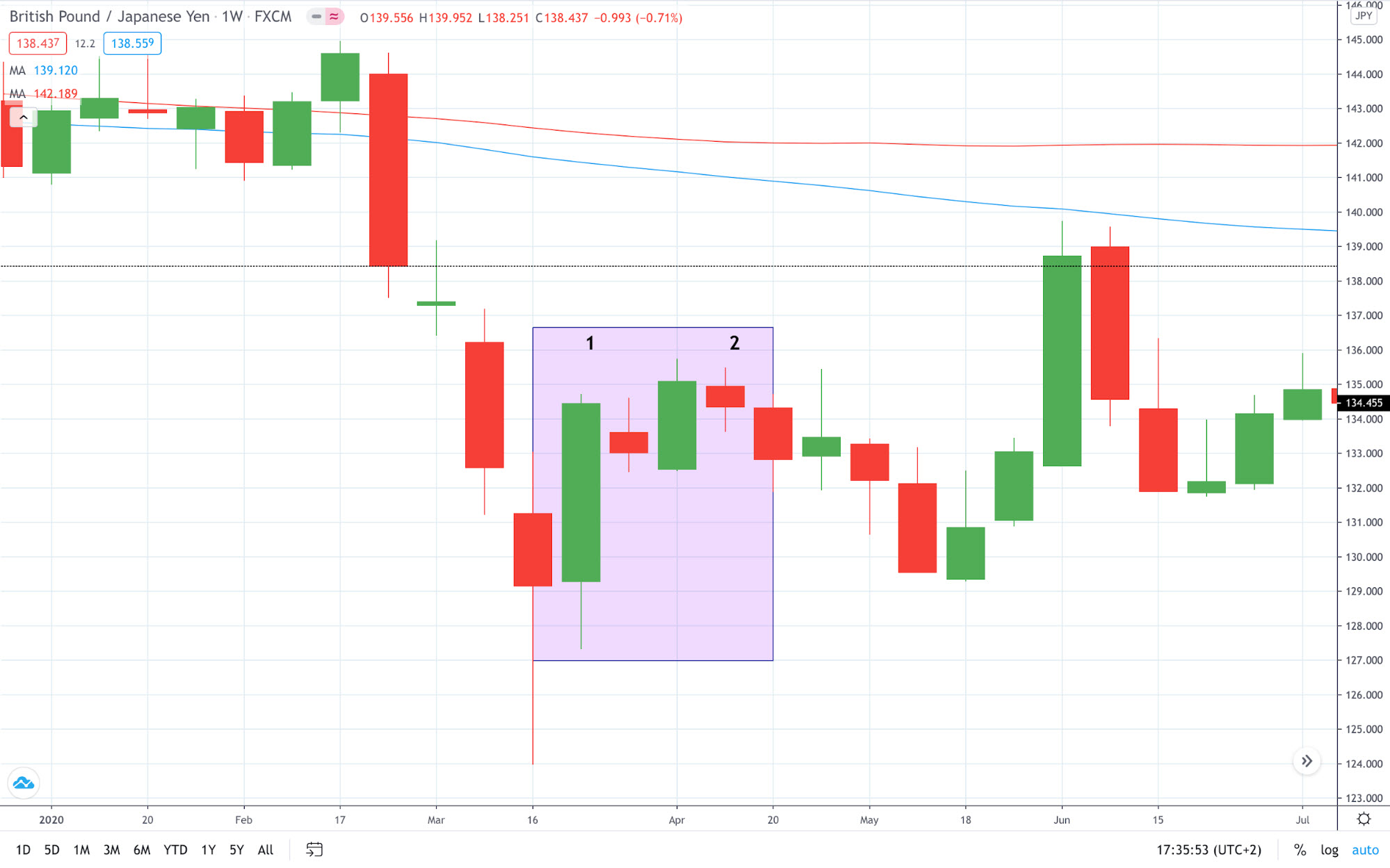 On both occasions, the second candle is contained within the first candle with small gaps to open the new trading week. Hence, if you are looking to find Harami patterns in Forex, your best chances are to look in a weekly chart.

The example above shows that no pattern is perfect. As said earlier, this is the reason to always consult other technical indicators to increase your chances of success. Try to find a level that is interesting from the perspective of another indicator before you open a market position.

How to Trade the Harami Candle

As seen in the example below, the appearance of the Harami candlestick pattern doesn’t guarantee that the market will reverse. Harami can prove to be a continuation pattern as well; that’s why it’s important to search for other clues that may confirm the theory that the market is likely to change its direction soon.

In another example, we see NZD/JPY trading on a weekly chart. At the top of an uptrend, the bearish Harami candle occurs. The entire setup is clean – the upside is in place before a gap lower occurs. In addition, the second body is smaller and overwhelmed by the first bullish candle.

The chances of a reversal are increased by the fact that the market has already failed at this level. The previous swing high was put in place after the buyers weren’t able to extend the uptrend above $83.70. Hence, this area is confirmed as the zone of interest for both sides. The appearance of the Harami candlestick formation in this area is just another sign that the market may reverse while swimming in these waters. 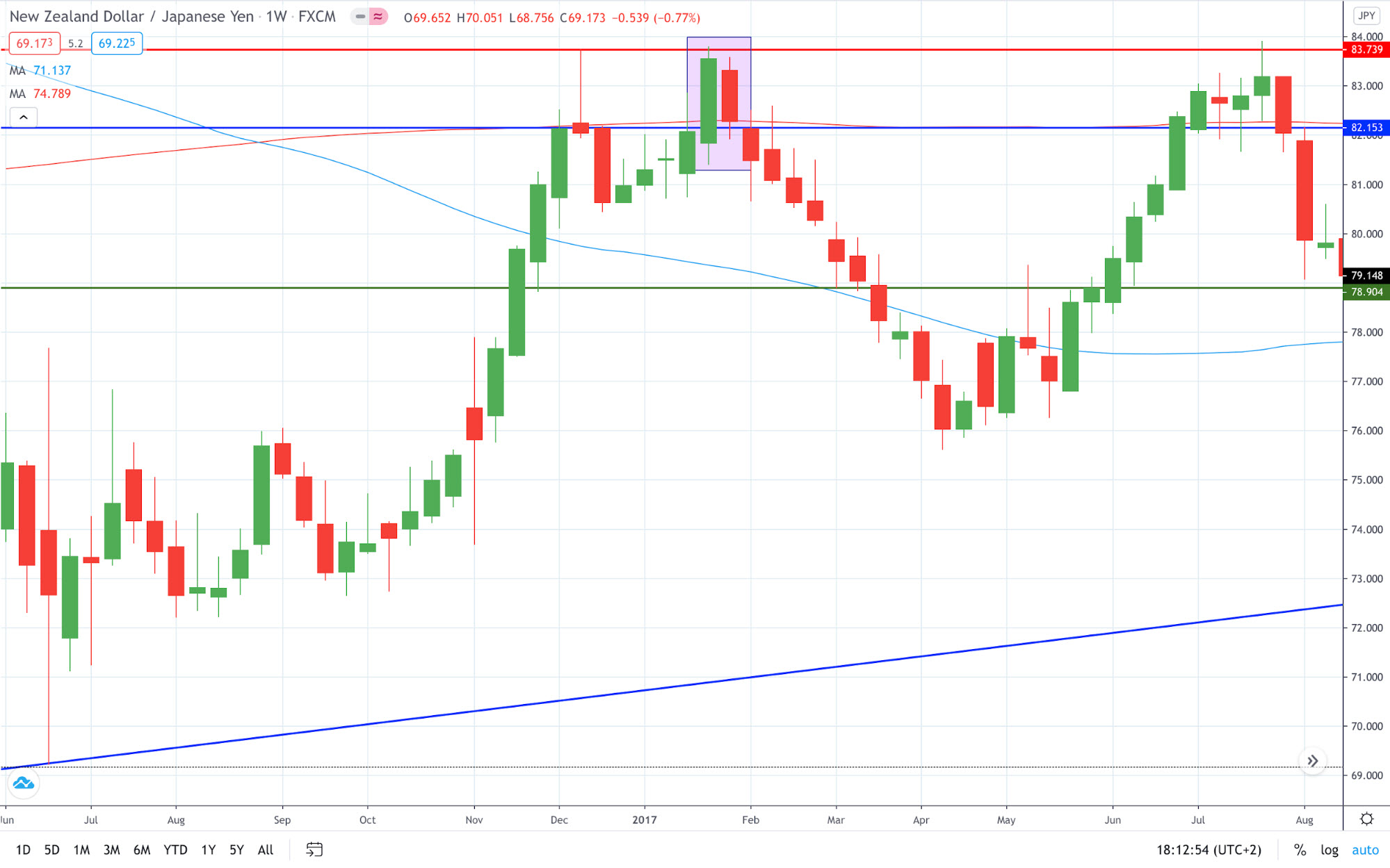 Furthermore, the third signal occurs that further validates our idea of a potential market reversal. The second candle closes below the 200-WMA (the red line), which is another bearish development in these market conditions.

At this point, the chances of a reversal are quite high. For this reason, we start to identify elements of our trading setup. The entry is placed at 82.30, at the level where the second candle closed as it became evident that the bearish Harami candle is formed.

Stop loss is located above the two swing highs at the top of a chart. By adding further 30 pips above the horizontal resistance to protect against whips, we get a stop loss at 84.00. The third element – take profit – depends on your risk sentiment and trading style. We advise you to use other technical tools again to identify where you might collect your profits.

By doing so, we find that the 100-WMA is a likely candidate to be targeted by the sellers on the way lower. As the moving average is heading lower, we close our trade at the point where the price action comes very close to touching it. In this case, this is 78.90. Therefore, we risked 170 pips to make 340 pips, which is exactly a risk-reward of 1:2.

One of the biggest advantages of Harami candlestick patterns is that it provides traders with an opportunity to cash in on large movements including high risk-reward ratios. The Harami pattern is widely used particularly because it provides traders with the opportunity to take advantage of a price reversal at the most convenient time, including strong risk.

Just like any other candlestick pattern, the Harami pattern also has its weaknesses. The Harami candlestick pattern is not really a common pattern. This is especially the case in Forex as it’s a 24-hour market and almost doesn’t yield any gaps in trading.

In the stock market, for instance, Harami tends to occur very commonly as gaps are part of a daily trading process. Still, when identified in the currency market, it’s quite a powerful candlestick pattern.

As with every other candlestick formation, it is advised to use it in conjunction with other technical indicators to improve its reliability. For example, if you want to trade a Bearish harami pattern, you could use the Relative Strength Index (RSI), or the stochastic oscillator, to significantly boost your chances for a successful trade.

What is a Harami Cross?

A Harami cross is a candlestick pattern consisting of a large candle that follows the direction of the trend, trailed by a small doji candle. The trailing doji is entirely contained in the body of a previous candle.

The Harami cross pattern serves as an indicator of a possible trend reversal. The harami cross can be both bullish or bearish. The former consists of a large down candle trailed by a doji and can occur in an established downtrend. It is confirmed if the price advances higher following the pattern.

Which candlestick pattern is the most reliable?

The candlestick pattern that had the highest accuracy rate in the book was the Three Line Strike pattern. This pattern consists of three black candles that can emerge during a downtrend.

Every bar posts a lower low and closes close to the intrabar low. The fourth bar opens at the lowest point but retraces in a wide-range outer bar that closes north of the high of the first candlestick.