How to Trade the Wedge Pattern in Forex

Essentially, a wedge pattern is a price formation that consists of two converging trend lines, which connect high and low price points of a currency pair. This pattern in a Forex chart represents a potential market correction on a prevailing trend. There are two types of wedges: types of wedges: ascending or rising wedge and descending or falling wedge.

In this blog post, we will discuss the structure of the wedge pattern, how to spot it, and most importantly, how to trade and make profits from it.

Characteristics of the Wedge Pattern

There are three elements or conditions in a wedge pattern:

Trend lines and a breakout are mandatory for the wedge to occur. A decreasing volume is a big plus if it happens, as it brings strength to the pattern. Also, the falling volume increases the chances of a breakout in a direction opposite to the prevailing trend.

The more the price action progresses and the closer it gets to the point where two trend lines intersect, the stronger is the breakout you can expect.

Before sharing tips on how to identify and trade a wedge pattern in Forex, let’s take a look at the two main types of wedges: ascending or rising wedge and descending or falling wedge.

As is the case with the majority of other formations, a wedge manifests in a bullish and bearish scenario. A rising or ascending wedge occurs when the pair’s price moves upwards. Trend lines are drawn to connect higher lows and higher highs. 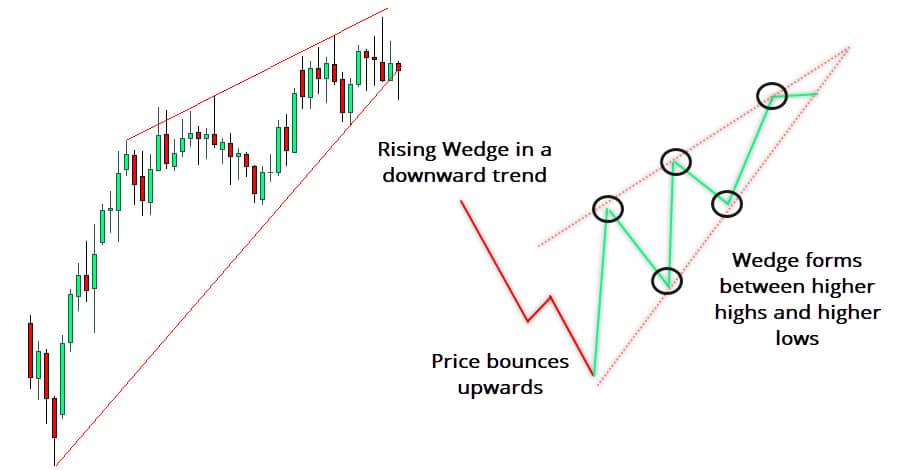 In a rising wedge, the higher lows are rising at a faster pace than the higher highs, which translates into two trend lines converging to a point where they intersect. Under this scenario, the rising wedge is considered to be a bearish pattern, as it represents an upward correction in a downtrend.

Although the price should move upwards so we can draw trend lines, the overall trend should be to the downside. This way, the actual pattern occurs during a downward trend, and it is seen as a continuation pattern when looking at the bigger picture.

A falling or descending wedge has the opposite structure of the rising wedge. The overall trend should be upward with a correction to the downside. Within the pullback, two trend lines connect the lower highs and lower lows as the volume decreases.

Before two lines converge, the buyers step in to end the corrective phase and resume the uptrend effectively. Again, the closer the price gets to a converging point, the stronger the breakout should be.

How to Trade the Wedge Pattern

Between 60% to 70% of the time, the wedge patterns are likely to break in the direction of the prevailing trend. Therefore, there is a considerable success rate, given how often this pattern can appear on Forex charts.

When it comes to trading the wedge pattern, the number one rule is to always wait for the breakout. Traders often make mistakes as they draw the pattern on the chart and instead of waiting for the breakout, they pull the trigger too early and enter a trade by anticipating that a break out will occur, rather than waiting to see whether the breakout will materialize at all.

As said earlier, there is more than a 30% chance that a breakout won’t happen at all. Hence, if you enter too soon, you can be stuck in a bad and losing trade.

We will now break down the steps that you need to take to successfully identify, trade and make profits on trading these patterns.

How to trade an Ascending or Rising Wedge

As we saw above, the ascending or rising wedge should occur in a prevailing bearish trend. In other words, a correction should occur. This means that the price will move higher temporarily, represented by the higher lows and higher highs.

To demonstrate how to trade a rising wedge, let us now take a closer look at the chart below. EUR/USD is in an overall downtrend. At one point, the price hits a fresh low, before it manages to correct upwards.

During the process of a rebound, two trend lines create a rising wedge. Finally, as the price action consolidates within a wedge, a breakout occurs to the downside. Once the bears force a close below the supporting line, we may place a trade.

The blue line shows how to measure the profit-taking distance. You can measure the height of the wedge by connecting the two trend lines, ideally from the point at which the wedge started. You should copy the line and drag it the point where a breakout may occur. Therefore, the extreme of the line will represent a target to establish a TakeProfit.

As seen in this example, the price action very quickly hits the profit-taking order. In this case, you would have cashed in around 300 pips.

On the other hand, the StopLoss orders should be placed inside the wedge, aiming for a minimum of 2:1 risk-reward ratio. If the price action goes back to the wedge, after a breakout is confirmed, it immediately invalidates the pattern.

How to trade a Descending or Falling Wedge

In contrast, a descending or falling wedge takes place within an uptrend. The bulls get exhausted at one point and the price action corrects lower.

Let’s take a look at the EUR/USD daily chart. The correction takes place, which happens in the formation of a falling wedge. Two trend lines converge and before they eventually intersect, the price breaks out higher. Again, it is important to monitor the volume.

By following the same principles shown above, we calculate the TakeProfit distance. Beforehand, we need to make sure that a breakout is clean and the close happens well above the wedge’s resistance. A StopLoss can be placed below the upper line to protect us from a failed breakout.

In addition to rising and falling wedges, we can use other technical indicators, such as the moving average or the Fibonacci retracement and extension. This allows us to gain a better sense of where the price action may stop or reverse. The more individual indicators that one zone hosts, the stronger the resistance/support is.

A wedge pattern is one of the most common trading formations in Forex. It consists of only two converging trend lines, which can occur as a falling (bullish) or rising (bearish) wedges.

Wedges are reversal patterns as the price breaks out in the direction opposite of the wedge direction, but in the same direction as the prevailing trend. A decrease in volume during the consolidation phase increases the chance of a strong breakout.

In two different examples, we demonstrated how to trade a wedge pattern by following simple and concise instructions. One of the more important rules is to wait for a clean breakout before entering a trade. More than 60% of the time, the stats show that a breakout occurs towards a reversal, which is a reasonable rate that offers profitable opportunities.

Post in the comments the wedges that you have traded or identified lately. If you still have questions on how to trade a wedge, here’s a video with a live trading example.